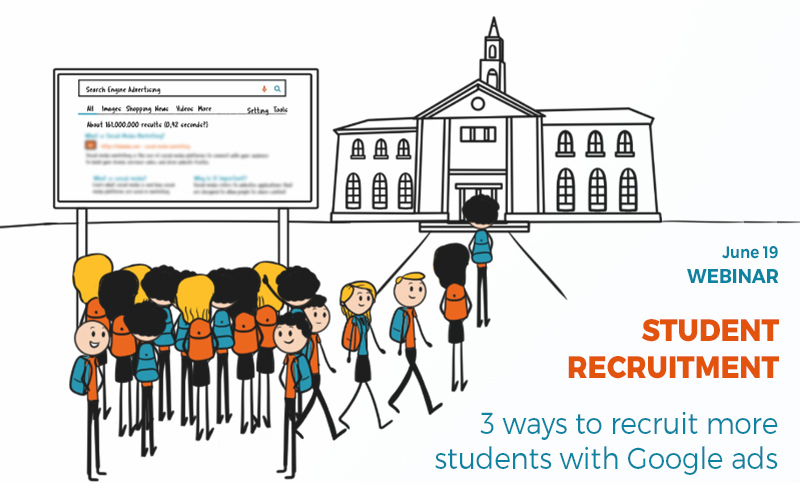 In this webinar, I covered 3 crucial factors you need to get right for your student recruitment campaigns on Google Ads campaign to be successful. I’ve gone over these extensively and have provided examples.

If you’ve read my book, you’ll recognise some of the key points; but I also touched on the current situation with COVID-19. And yes, it is possible to run successful campaigns today!

The webinar took place on 19th June 2020. And here are the key points.

If you’ve ever logged in to a Google Ads account, you may have realised that there is always something to improve. You can try different bidding strategies, tweak your ad copy, add or remove keywords and much more. It’s as if Google Ads has morphed into a never-ending online game.

To be fair, careful setup of ad campaigns and regular monitoring are important if you’re to recruit any students at all with the campaigns.

But at the same time, even a perfectly set up campaign won’t buy you anything if the other pieces of the puzzle aren’t taken care of: strategy, education, follow-up and analytics.

Google Ads makes up just a tiny part of a universe of campaign types that you can run to recruit students. Its particular strength is that it reaches the most highly engaged group of people, who are in the midst of making a decision on which programme to pursue, and where.

In themselves, Google ad campaigns can be subdivided again, into branded, course based, competition based and foreign language campaigns. Each has its own advantages and disadvantages. Generally, it’s recommended to first max out the potential of course based campaigns.

In the below segment, I touch on the fact that many education providers are overweight on branded campaigns.

(You’ll find more about the other campaign types in the full webinar recording at the bottom of the page).

COVID-19 has impacted everything and the education sector is not an exception. Should you just pause your Google Ad campaigns, because there is so much uncertainty?

I argue that there is actually an opportunity, if you can be proactive and rethink your advertising campaign and everything around it. Prospective students do face a lot of uncertainty in making a decision. On the other hand, they’ll want to do something useful with their time.

So acknowledge the situation and provide as much clarity up front as possible. In this video, I share how I worked with a language school, and actually found an increased number of conversions from Google Ads right through the lockdown.

Did you find this content valuable for your approach to online student recruitment? 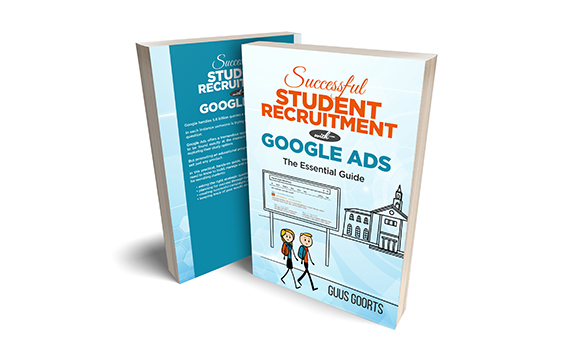 Google Ads for schools: Why “match types” are essential
July 7, 2022
Download my e-book 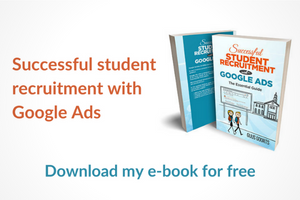 Register for the webinar

You can find out more about which cookies we are using or switch them off in settings.

This website uses cookies so that we can provide you with the best user experience possible. Cookie information is stored in your browser and performs functions such as recognising you when you return to our website and helping our team to understand which sections of the website you find most interesting and useful.

Strictly Necessary Cookie should be enabled at all times so that we can save your preferences for cookie settings.

If you disable this cookie, we will not be able to save your preferences. This means that every time you visit this website you will need to enable or disable cookies again.

This website uses Google Analytics to collect anonymous information such as the number of visitors to the site, and the most popular pages.

Please enable Strictly Necessary Cookies first so that we can save your preferences!